When I first heard about the second world war bomber plane wreck lying in the azure depths of Kas, I was quite excited. I had my first dive to the wreck about five years ago. The wreck was located near flying fish reef at a depth of between 58 and 71 meters.  I remember my first glimpse of the impressive sight of the wreck  while decending deeper at 30 meters. 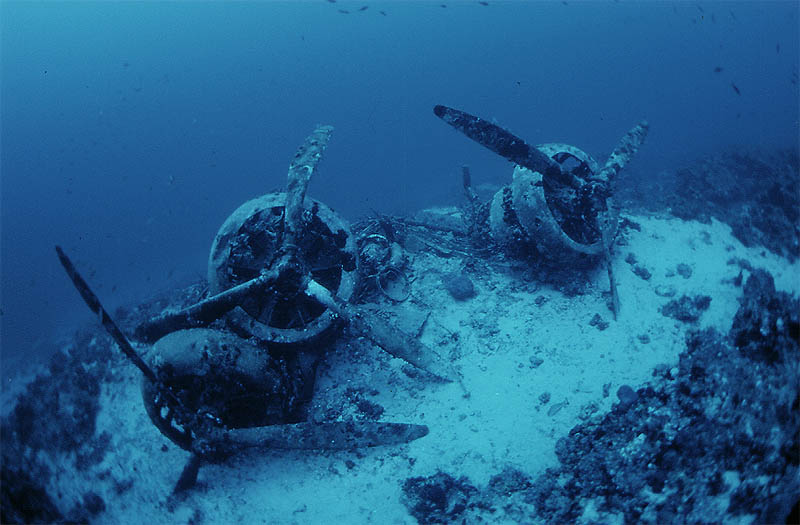 The plane was the victim of a fierce struggle to dominate the skies over the Aegean and to disrupt the supply lines during the second world war. Our bomber - hunter plane was a Savoia-Marchetti SM 79 "Sparviero" with a wingspan of 21 meters, hull length of 16 meters, 3x610 hp. engines. The plane was built in Italy in 1935 and designed to be flown with a crew of five.  It carried  3x MG 12.7 mm and  2x MG 7.7 mm machine guns together with bomb sledges underneath for the purpose of carrying various types of bombs. Savoia-Marchetti was considered as one of the most successfull bomber-planes of second world war. In the Mediterranian and the Aegean seas it had a devastating effect on allied shipping by the deployment of its torpedo bombs. Our plane had probably taken off its base in Rhodes with the assignment to sink the British warships inside the Meis harbour. According to an eye withness (who is an old fisherman from Kas), our plane was one of the three Savoia-Marchetti's that was shot down that day by the anti-aircraft gunners stationed in Meis. One of the planes crashed into the mountains of Kas, the other one crashed into the sea along Kas coastline (to be found by curious divers ! ), the third one (our plane) crashed into the sea near the small Turkish island (flying fish reef). It's pilot had managed to jump out with a parachute but only to be riddled with bullets from Meis. 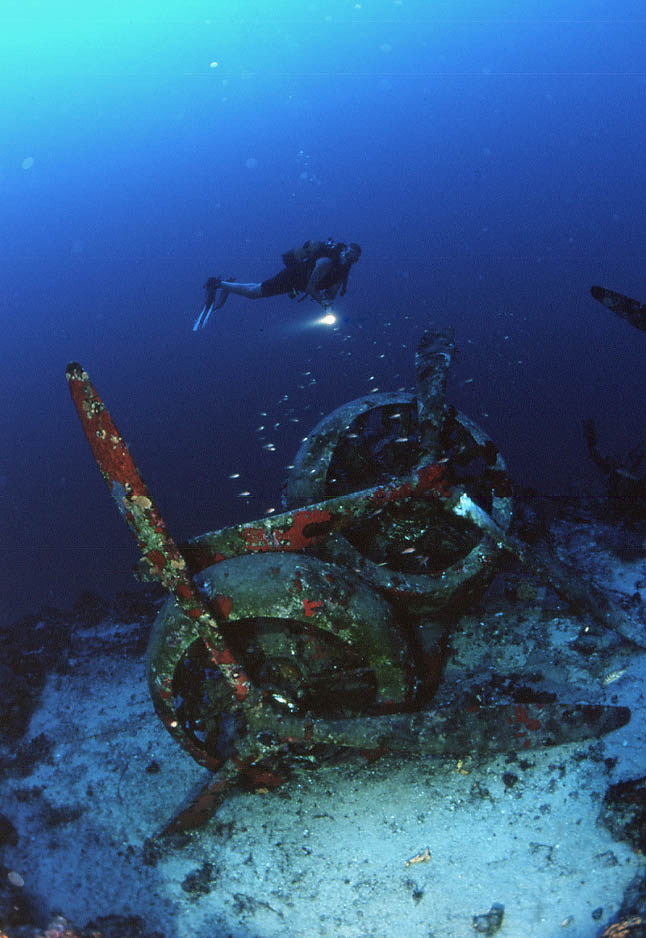 Judging from the planes wreckage underwater, I was able to construct a theory about the crash. The plane did not hit the water nose down but rather planed on water surface, hitting the right wingtip first. With the impact the right wing folded on to the left. This theory partially explains the right wing engine sitting on top of the middle engine. After all this is all theory and guessing, what's real is that the  plane became an eternal resting site in the blue abyss for its tired and defeated crew who were fearless heros.. They took on their assignments bravely even though they knew that their chances to be shot down was one every three assignments.

The bow section of the plane rests in 58 meters of water, the tail section is at 71 meters. Therefore it is well beyond the amateur diving limits. Careful preparations and consideration should be given before any attempts to dive the wreck. 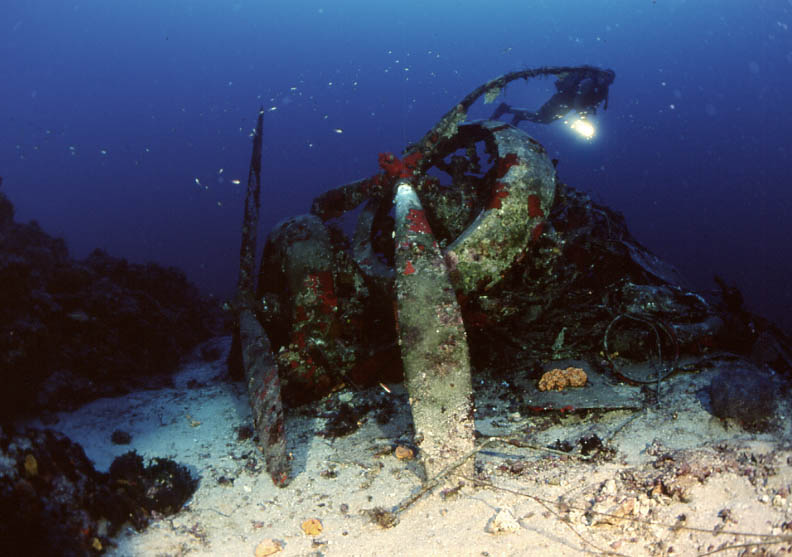 Tail section. Depth gauge is showing 71 meters. It is almost dark. Dive computer is making all kinds of noises to get me back to surface.

At first it seemed like narcosis but film does not lie..

For further information and photos of the plane: